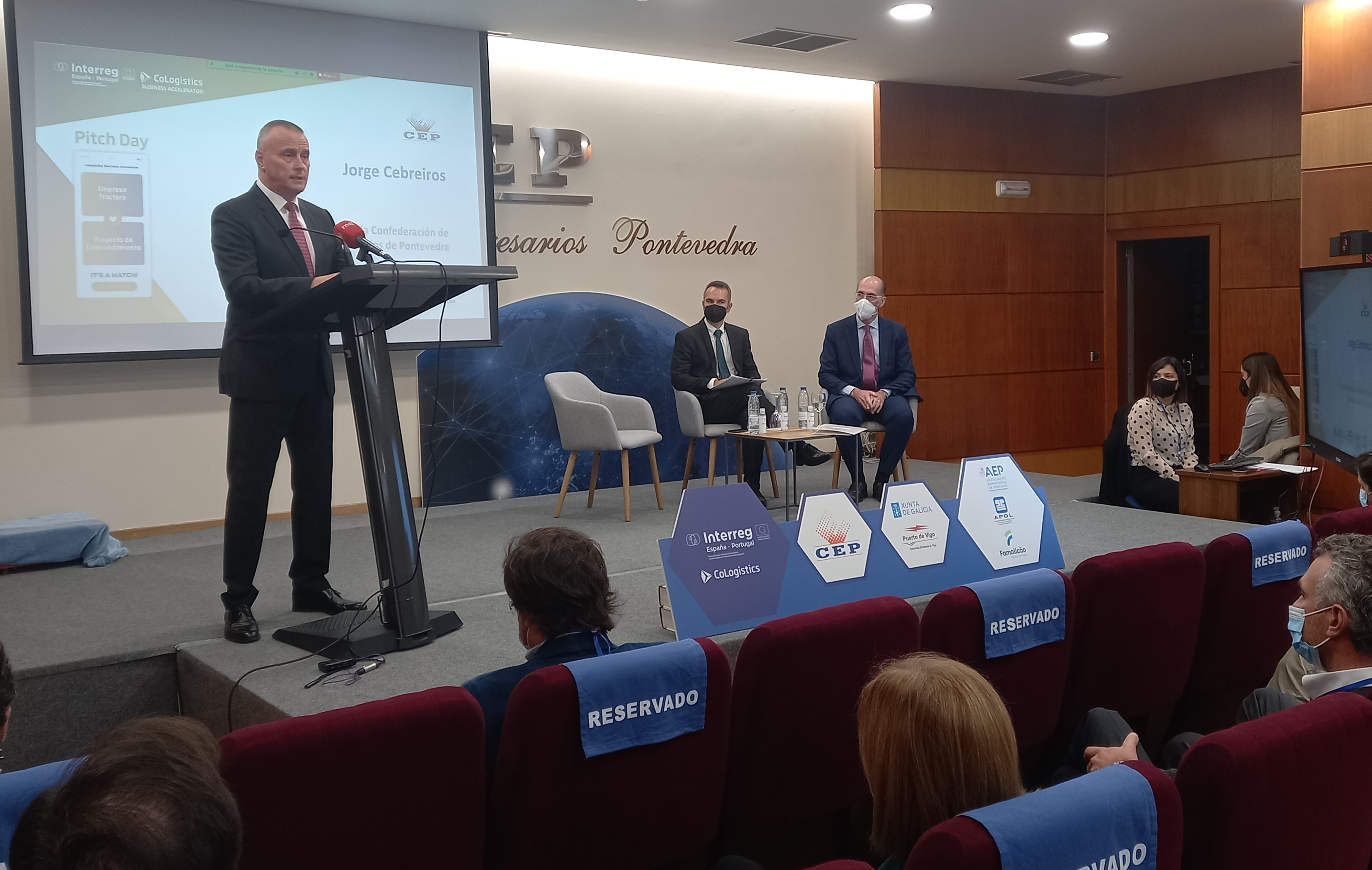 Vigo, November 5, 2021 - For four minutes, each entrepreneur has defended his proposed solution to one of the challenges posed by the tractor companies participating in the business accelerator of the European project CoLogistics led by the Confederation of Employers of Pontevedra (CEP).
"It is a great day for CEP. The results have exceeded all initial expectations. We have managed to involve in the CoLogistics Business Accelerator (CBA) tractor companies from Galicia (14) and Portugal (9). All the challenges launched resulted in 40 solution proposals in Galicia alone, and around twenty entrepreneurs," explained Jorge Cebreiros, president of the Confederation.
Despite the flood of proposals, some of the challenges have remained unanswered. Today's session allowed 17 entrepreneurs to summarize their projects in order to convince the driving companies that their initiative was the best.
Next Monday, the Executive Committee of the CBA, made up of representatives of the CEP, the Igape and the Associaçao Empresarial de Portugal (AEP) will choose, at the proposal of the tractor companies, the 14 winning projects in Galicia and will reveal their names.
Cebreiros congratulated all the entrepreneurs and start-ups that presented solutions and encouraged them to continue along the path of innovation.
Referring to the joint launch day, in which both the Galician and Portuguese partners of the project participated, Cebreiros said that today was a great day for the Pontevedra Business Confederation as it was demonstrated that cross-border cooperation is a reality with the ambition of continuous improvement.
Jesús Vázquez Almuíña, President of the Port Authority of Vigo (APV), valued that the logistics chain of the Euroregion needs improvements, even more so in these times of global crisis, so that, in his opinion, these meetings allow to innovate and improve its performance, making the logistics sector more sustainable not only from the economic point of view, but also from the environmental point of view.
For his part, Fernando Guldrís, director general of IGAPE, stressed that logistics is a key vector of competitiveness for business activity, which in Galicia alone brings together more than 11,700 companies that generate 2.2 billion in turnover and employ more than 50,000 workers.
The CBA has a double objective: to solve the technological challenges in logistics or supply chain of the companies that are part of the accelerator and to search, select and consolidate 20 innovative, viable and scalable entrepreneurship initiatives, which allow to face the challenges posed by the companies.
The Galician driving companies are: Altia Logistic Software, Altrans Fast Cargo, Babé y Cia, Bandalux, Coca Cola, Codisoil, Darlim, Deltacargo, Frigalsa, Grupo Marsan, Hijo de Carlos Albo, Kartin, Pérez-Torres Marítima and Selmark.
In northern Portugal, Argatintas, Campicarn, Ferrinha Filhos Indústrias, Lda., Injex, Leica, Lourofood, MTEX, Tesco and TN Nogueira are participating.
It should be remembered that the accelerator is an initiative within the framework of the European CoLogistics project which, in addition to the CEP and the Xunta de Galicia - through the Igape and the Directorate General of Mobility of the Department of Infrastructures and Mobility - has among its promoting partners the Port Authority of Vigo, the AEP, the Administration of the Port System of Northern Portugal (APDL) and the Càmara Municipal Famalicâo (Famalicâo Municipal Chamber).